GENTLE MONSTER and AES+F announce the first-ever auction of a video artwork made for a fashion collection campaign, minted as an NFT on SuperRare.co

The auction will begin on May 10th and take place over 24hrs.

For decades, artists including AES+F have been using the aesthetics of advertising and fashion as a kind of ready-made to critique the consumption of media and reflect contemporary life. For the first time ever, the renowned artist collective and South Korean fashion brand GENTLE MONSTER are collaborating to completely erase the boundary between art, advertising, and fashion by offering a campaign film for auction as a complete and authentic artwork. The collaborative work expands the definition of art by existing simultaneously in two realms, straddling the line between artwork and fashion advertisement, not in the mode of one critiquing or referencing the other, but rather as an acknowledgment of a reality in which large audiences find the two contexts indistinguishable.

As part of GENTLE MONSTER’S 2021 Nano Collection campaign, the video artwork titled “The Circle of Life” will be displayed across Asia, Europe, and North America. Accompanied by a soundscape by award-winning composer Dimitri Kourliandski, “The Circle of Life” depicts a surreal landscape populated by people of all races and ages who don stylish but eccentric nano-glasses. Entranced by chimeric creatures that descend from a biomorphic structure in the sky, the characters reach out to the chimeras to touch them, taking off after them on futuristic floating boards, always coming close but never reaching them. When the protagonists return to the ground, the creatures continue circling above them, just out of reach, and the cycle repeats - an allegory for life that has no beginning or end. 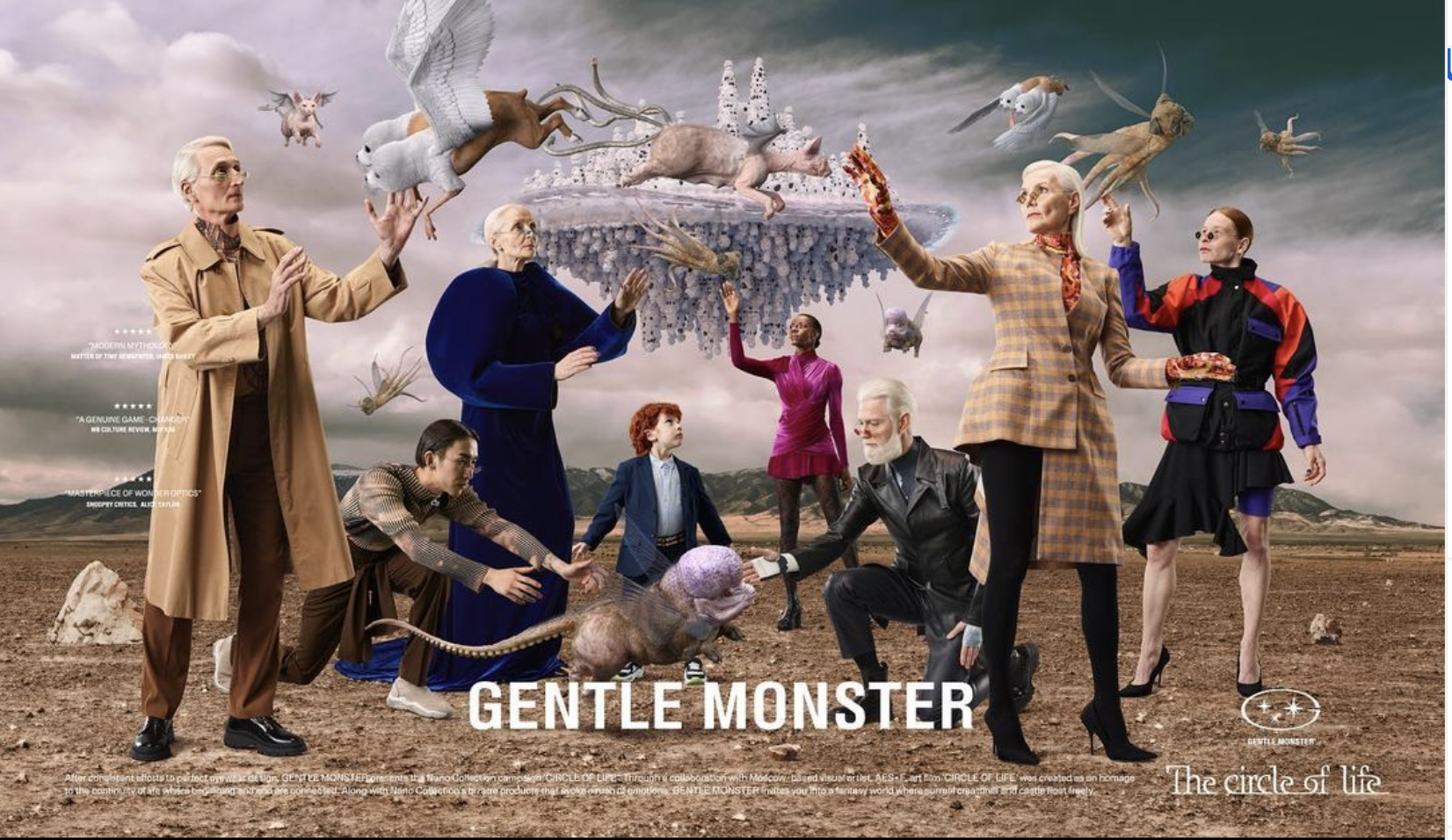 After AES+F debuted their famous Last Riot video at the 2007 Venice Biennale (the art industry’s most important biennial event), Miuccia Prada told The New York Times that it was her favorite work. Since then, AES+F’s aesthetic has increasingly been referenced by the fashion industry, yet the collective hasn’t collaborated with any brands until 2019, when they created a video artwork for the launch of the GENTLE MONSTER x FENDI capsule collection, and then “The Circle of Life” for GENTLE MONSTER’s Nano Collection in 2021. Like the GENTLE FENDI campaign, the “The Circle of Life” is situated within the artists’ “Inverso Mundus” (2015) universe, which depicts a Boschian or Goya-esque world of inverted values and power-relations.

“The Circle of Life” will be auctioned off on NFT platform SuperRare.co on May 10th. The buyer will receive all three full-length versions of the art film in different aspect ratios, as it was used in the advertising campaign. Following the auction of the video, GENTLE MONSTER and AES+F will make a limited number of poster images from the campaign also available for purchase as NFTs.